The LATA Foundation raises over £2,000 at annual pub quiz 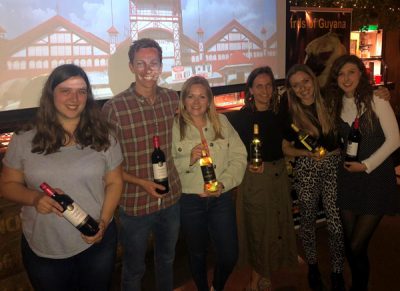 The evening kicked off with a short introduction from LATA Foundation Chairman, Chris Pickard, who outlined the LATA Foundation’s main ambitions before handing over the floor to the Guyana Tourism Authority. UK representative, Kate McWilliams and Tony Thorne from Wilderness Explorers showcased some of Guyana’s many highlights including the dramatic Kaieteur Falls, wildlife and bird-watching opportunities and examples of ambitious community led and owned tourism projects in the country. LATA chairman and Air Europa director Colin Stewart followed with details on the latest developments from the airline, including new routes to Medellin, Panama and Iguazu Falls.

Then expert quiz master Jim Ashworth took to the mic to test the teams across a range of classic pub quiz genres with the Latin American travel industry battling it out to become the winners. The competition was red hot with Audley Travel taking the top spot by just two points, followed by Journey Latin America in second place.

The winners were each treated to a bottle of South American wine, courtesy of the LATA Foundation chairman, before the raffle draw which concluded with the star prize of two flights to Latin America, flying with Air Europa, won by Adam Lloyds from Wanderlust.

“On behalf of the Trustees of the LATA Foundation we would like to thank everyone – individuals and companies – that were involved in the annual LATA Foundation pub quiz.”

Chris Pickard says, “On behalf of the Trustees of the LATA Foundation we would like to thank everyone – individuals and companies – that were involved in the annual LATA Foundation pub quiz. It does not matter if you came along to take part, supported the raffle, or were involved with the organisation, we, and the people you are helping in Latin America, “Thank You”. We are of course absolutely delighted to have raised over £2000 at the quiz.

Tweet
Tags: quiz
From: Events, News
← 2019 Projects announced!
Over £6000 raised for the LATA Foundation in first ‘Captains of Industry’ Event →

Linen Theme by The Theme Foundry